No Limits Fall Summit was held on December 10th and 11th at Carol Joy Holling, in Ashland, Nebraska. Turnout was a little lighter than expected due to weather issues in the northeast part of Nebraska. However, not even Nebraska weather can stop our youths from pressing onward to make a change. Nothing can stop us from having fun, while learning how to stop Big Tobacco and spreading awareness! There were 26 youth at this event representing 12 different towns and cities.

Our youth board gave several presentations using facts, statistics and personal testimonies to demonstrate why No Limits is an important organization to be involved with. They also explained what members can do to help in the fight against Big Tobacco when they return to their communities. The main focus of this summit is to introduce and encourage activism. One activism project that made a large impact among youth was Project 1300. 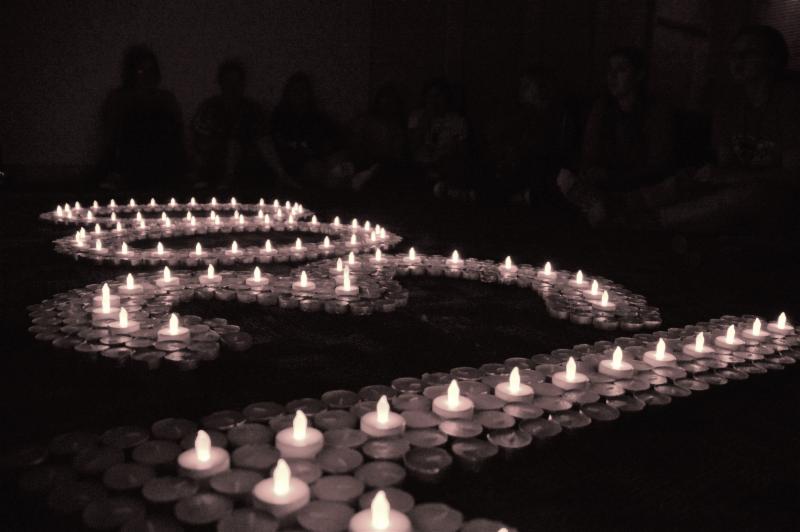 Project 1300 (right) is a memorial that represents the number of people in the United States who die due to tobacco related issues every day. To create this memorial, we used candles to create the number 1300. Each youth had the opportunity to go in front of the memorial and share a story about how tobacco has impacted their life or the lives of their loved ones. The remainder of the Fall Summit was spent focusing on other projects youths can do to bring this message home and to educate their communities. The youth left the summit inspired and ready to take the fight against Big Tobacco into their own hands and their own communities.

Kick Butts Day was a success! With more than 75 youth from across Nebraska in attendance, No Limits was able to provide useful information about Big Tobacco to our state senators. Youth were encouraged to stand up, speak out and make a change. 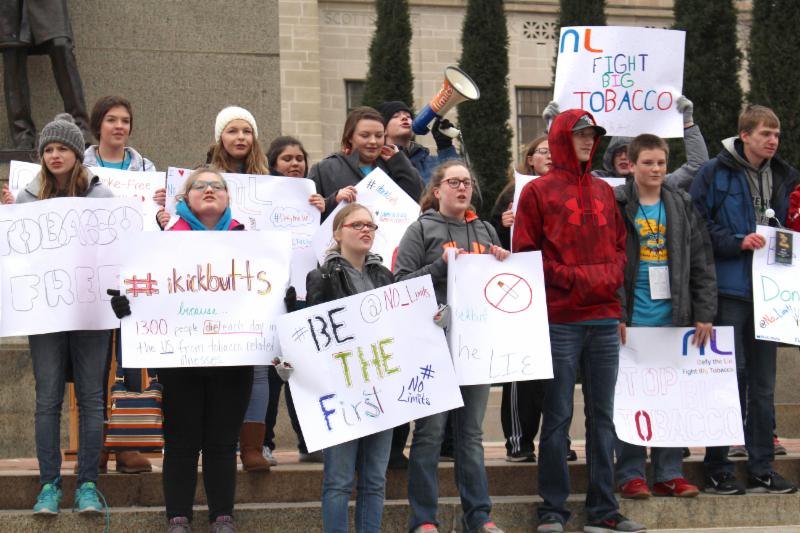 Day one was filled with information to prepare youth for meetings with senators and the rally. The Youth Board presented information on No Limits, how to educate your senator and learned the rally chants.

Wednesday morning was the big day where youth got to meet with their senators, march around downtown Lincoln and hold a rally at the Capitol. Three youth board members gave speeches on the steps of the Capitol.

Kamrin Edmonds, a sophomore from Wilber-Clatonia, spoke about how No Limits can bring people together, united under a good cause. Brooklyn Larimore, of Omaha spoke on Project 1300 to educate people on how many lives are lost to tobacco-related illnesses in the United States. Project 1300 is a visual memorial completed by lining the steps of the capitol with shoes–one for each person lost. And last, Cecelia Ponce, a senior for Hartington-Newcastle, gave a “Thank You, No Limits” speech in which she shared with us how No Limits has impacted her life.

Despite the cold weather, the march and rally were great successes! We encourage you to stay involved in local politics and be the change in your communities. Thank you to everyone who participated! 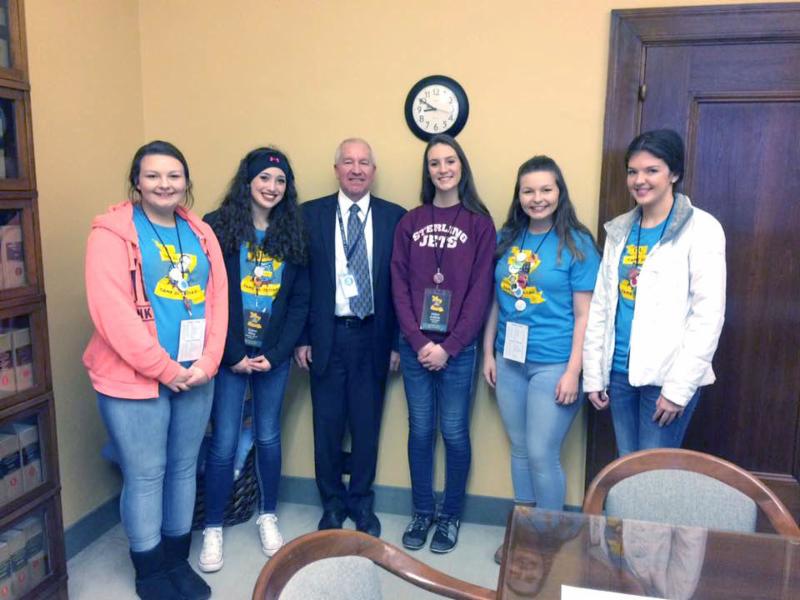 A brand new group of No Limits supports are getting excitedly involved in our events and challenges! We want to issue a special shout-out and welcome to the Johnson-Brock group. Every voice counts in the journey to make Nebraska tobacco free, and this group’s dedication to the cause is greatly appreciated. Thank you for helping No Limits show Nebraska how we can be tobacco free and keep up the good work! 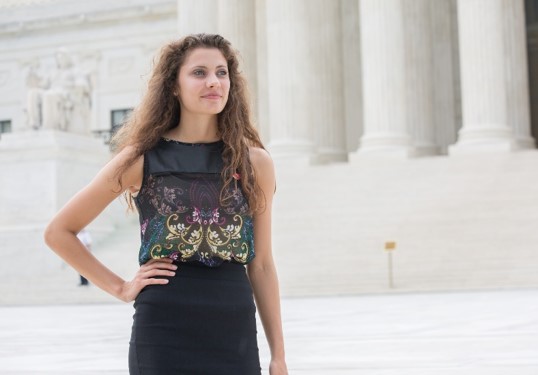 Corporate marketing is a fundamental cause of disease, and tobacco is one of the most heavily marketed products in the consumer market as well as a prime reason for inner city health disparities in the United States. Every hour, the tobacco industry spends an average of one million dollars on advertising alone. In 1992, major tobacco manufacturer R.J. Reynolds stated, “We don’t smoke that sh*t. We just sell it. We reserve the right to smoke for the young, the poor, the black and the stupid.” We know that the tobacco industry targets certain populations because they have said it themselves, and it is evident among the African American community.

Only 15.1% of adults in the United States are smokers, and of that total, 16.8% are African American and 17.4% are Caucasian. Though fewer African Americans smoke in comparison to Caucasians, the trends in usage differ greatly between the two. For example, 88% of adult African American daily smokers choose mentholated cigarettes versus only 26% of Caucasian smokers. We see the highest menthol smoking rates among African Americans, but why? Looking deeper, we find it all comes back to the marketing activity. Of all corporate advertising, the tobacco industry has the greatest influence on health behaviors, so when there is an increase in the density of tobacco advertising, we find that there is an increase in tobacco use. African Americans receive the highest density of tobacco marketing compared to any other racial group, and the majority of that marketing pushes mentholated cigarettes. This disproportionate amount of menthol marketing is why we see the increased menthol smoking rates among African Americans. Throughout history, the tobacco industry has tailored their menthol marketing specifically to target African Americans. The marketing we see today is merely going off of historic marketing tactics, and that is because they have been successful.

For decades, the tobacco industry has tried to establish themselves positively within the African American community. During the Civil Rights era, the tobacco industry sought to expand their cigarette market by identifying with the movement and tailoring their advertisements to reach the African American consumer market, which was much smaller. With the help of ethnic marketing firms, the tobacco industry started tailoring their marketing to certain populations. For example, African American youth were heavily targeted because, according to recommendations from a marketing firm, would “position the [cigarette] brand very well for the future” of the industry. This is when the free distribution of cigarettes out of mobile vans, such as Brown & Williamson’s “Kool Music on Tour,” emerged. Through the 1970s-1980s, mobile vans were distributing up to 1.5 cigarette packs every minute, and were “confined to the inner-city area to maximize the benefits…on the target market” Distributing free samples was an inexpensive way for the tobacco industry to reach a large amount of people while promoting their products. Advertisements used 1980s Hip-Hop, which was popular among African American youth at the time, as a theme to attract young smokers as well. Why does it matter that African Americans smoke more menthol cigarettes? The menthol trends reflect more than just the power of marketing. Compared to any other population, African Americans are more likely to experience the burden of tobacco.

Around 45,000 African Americans die annually due to tobacco-related illness, and it is estimated that 500,000 more lives will be lost prematurely because of it as well. Menthol cigarettes pose greater health risks than traditional cigarettes because they contain a higher concentration of carcinogens. Since they aren’t as harsh to breathe in, the smoke is often retained for longer periods of time, increasing the health risks. Lung cancer is the most common disease associated with smoking. Though African Americans smoke less than any other racial group, they see the highest rates of lung cancer morbidity and mortality due to the disproportionate use of menthol tobacco products. In fact, African American men have a 20% higher chance of dying from lung cancer compared to Caucasian men.

No community should have to suffer from tobacco and tobacco related health issues. We see the industry’s manipulative targeted marketing, and we see the death and disease that it causes. We have seen enough tobacco, and together, we can bring an end to manipulative marketing.

For more information about campaigns combating the tobacco industry’s successful menthol-targeting of African Americans, visit www.blacklivesblacklungs.com. Black Lives | Black Lungs is a digital project bringing awareness to targeted tobacco marketing. It focuses on the burden the community has seen and sheds light on the truth behind the issue. The project was created by Lincoln Mondy, a former Truth Initiative Activism Fellow. The Truth Initiative (www.thetruth.com) is another great resource for more information on tobacco and minority communities, and much, much more!