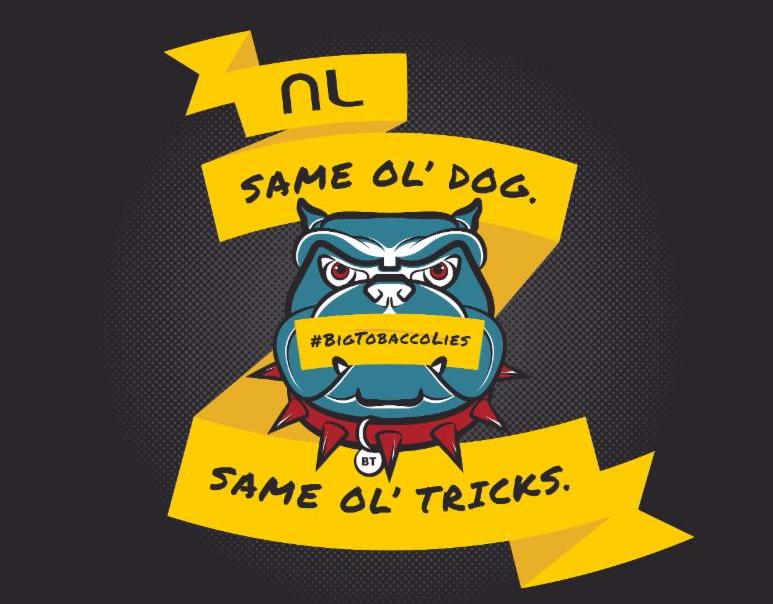 The theme for the 2016-2107 No Limits Youth Empowerment Movement is “Same Ol’ Dog. Same Ol’ Tricks.” The Youth Board created this theme because Big Tobacco has a history of using slick marketing tactics, towards disparate populations, such as youth, and we are tired of it. As youth, we have the power to change the social norm created by Big Tobacco. This year, we want to educate our peers about:

We are excited to educate and empower the youth who attend our events such as our Activism Summits, Kick Butts Day Rally and regional trainings and outreach events!

No Limits wouldn’t be what it is today if it wasn’t for all of our school and community groups across the state. The Youth Board wants to feature one of these groups each issue and talk about what they have been doing in their community. So, let’s talk about the Grand Island Senior High Students Against Destructive Decisions (SADD) group. 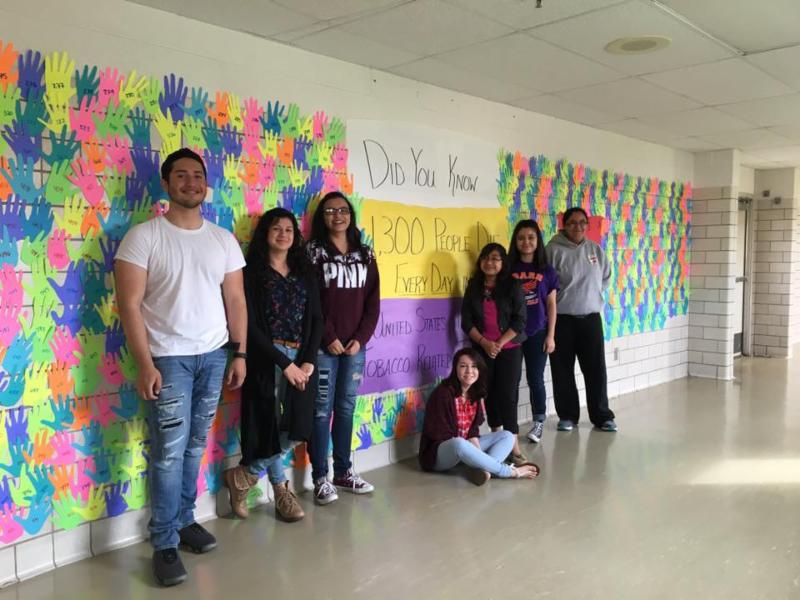 They have been working hard to use what they have learned at No Limits events to spread the truth about Big Tobacco. They have brought a large group to every No Limits event, used mini-grant funds to do activism in their community and even hosted their own Youth Prevention Conference. Above is a picture from the 2016 Summer Activism Summit, below it is a picture of their Project 1300 displayed at their school. As a Youth Board, we would like to thank you for all of your hard work and passion for fighting against Big Tobacco! 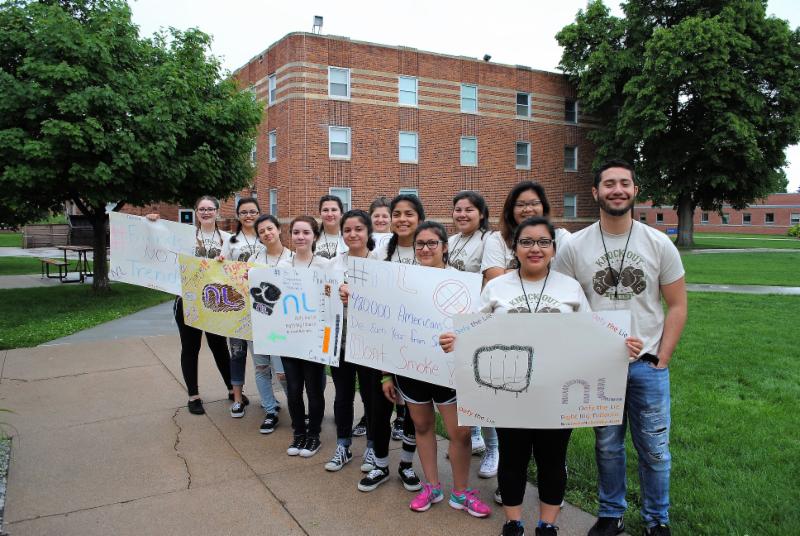 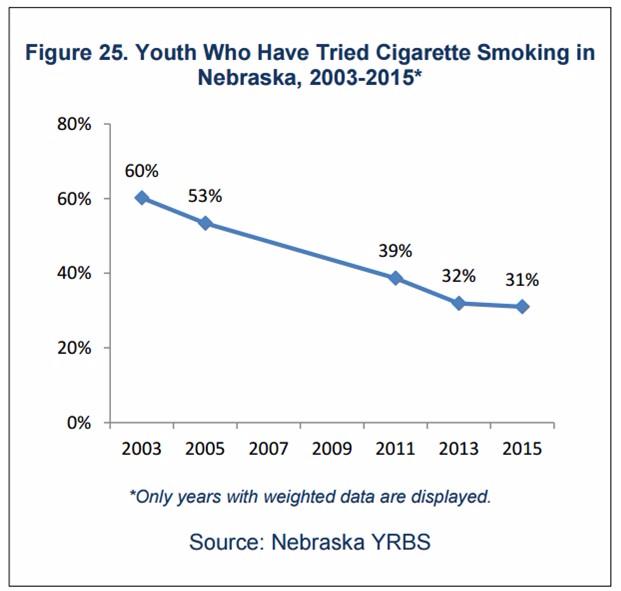 This graph represents the percentage of youth who have tried smoking from 2003-2015. As you can see, the number has gone down almost 30 percent in the past 12 years. This is exciting for us as youth activists because it means that what we are doing is working, and we are making a difference as a whole. We look forward to continuing to see this number drop over the next several years!

The Campaign for Tobacco-Free Kids held its annual Youth Activism Symposium this past July in Washington D.C. Twenty-one youth advocates from across the United States came together to discuss the upcoming year, create personal and group goals and speak with senators on Capitol Hill. I am fortunate to have been chosen as one of the twenty-one National Youth Ambassadors with the Campaign for Tobacco-Free Kids, proudly representing the state of Nebraska.

I had wanted to become involved with Tobacco-Free Kids for a long time because I love the work that they do. As soon as applications for National Youth Ambassadors were available, I filled one out and was thrilled to receive an acceptance email. The Symposium was five fun-filled days of education and empowerment led by the Youth Advocacy team, Gustavo Torrez and Erica Olmstead. The experience took my tobacco advocacy to a new level. Rather than going over the same information we already knew from our home-state organizations, we learned new methods of applying our knowledge to drive even more action. Every one of us was intrigued by different aspects of tobacco prevention, and we were allowed to focus on our specific interests. Each National Youth Ambassador received his or her own personally tailored notebook that provided all the information we may need about our own state. Having the advocates come together from across the country to make change was very inspiring. We were able to see the differences between states focus and prevention tactics, and the progress each state is making.

The people I met at Symposium were some of the most supportive and encouraging people, and we formed a tobacco advocacy family in the days we were together. When we weren’t working hard training or brainstorming new ideas, we were bonding in the heart of D.C. I had never been to D.C. before, and there isn’t a group of people I would rather have experienced it with. A passion for tobacco prevention isn’t something commonly shared between people, so being able to spend time with twenty other involved youth was a unique experience. Gustavo and Erica are two of the most passionate and driven people, making them perfect for running the Campaign for Tobacco-Free Kids. 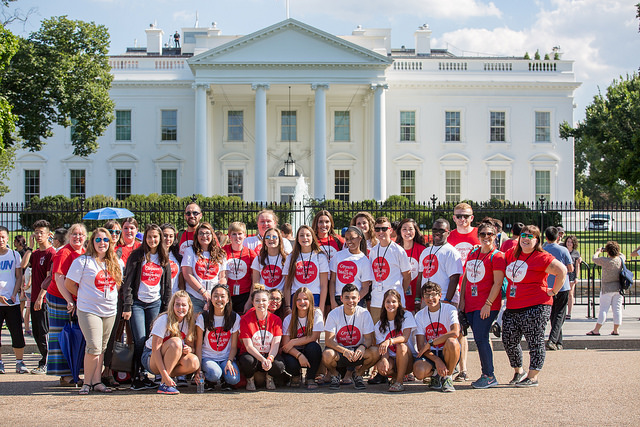 One of the most memorable moments from Symposium was walking through Capitol Hill for senator and representative visits. I have spoken with Nebraska state senators in the past at Kick Butts Day events, but never a National Representative. We were there to discuss the importance of including all products in tobacco regulation and to make our voices heard. Being on Capitol Hill was intimidating because of all of the power it housed, but it was more empowering because of the change that had happened there. I knew that I belonged on Capitol Hill and was ready to activate change by getting my voice heard. I was set to meet with Senator Ben Sasse and Senator Jeff Fortenberry that day, two names I had only heard on television, so I was a ball of nerves. I was attending the meetings with another National Youth Ambassador, Iowa’s Caitlyn Martin, so my nerves were only temporary. Caitlyn provided the support I needed to carry out confident and successful meetings, and we formed a strong bond through our shared experiences. The fact that I was only a teenager representing the Campaign for Tobacco-Free Kids as a National Youth Ambassador on Capitol Hill made me realize that I had the power to do anything that I set my mind to. 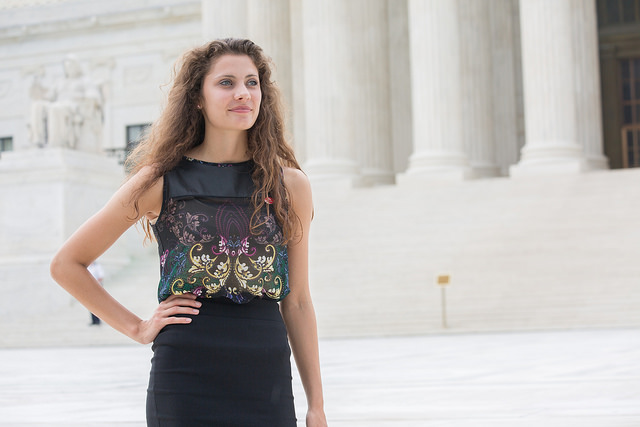 If you care about tobacco prevention and want to become more involved, I encourage to join the Campaign as a National Youth Ambassador. The relationships you mold, experiences you gain and information you learn is an once-in-a-lifetime opportunity that you will always remember.